Read the first in our In Case You Missed It Series, where we review previously published scientific research about Constant Therapy and brain rehabilitation. ICYMI is written by The Learning Corp scientific advisor Paul Wicks, Ph.D., a neuropsychologist and expert in digital health, clinical trials, and patient centricity. Paul’s work has been profiled by the BBC, NPR, CNN, BBC Radio 4, the Wall Street Journal,and the New York Times. He was awarded MIT Technology Review’s TR35 “Humanitarian of the Year” award, recognized as a TED Fellow, and recently joined the inaugural FLIER Program at the Academy of Medical Sciences. He sits on the editorial boards of the BMJ, BMC Medicine, JMIR, Digital Biomarkers and The Patient.

In the first few hours, days, and weeks after having a stroke, patients receive a lot of medical attention from doctors, nurses, and speech-language pathologists. These specialist teams work together to treat stroke, prevent worsening, and begin rehabilitation. But what happens in the months and years afterwards, when the patient has been sent home from hospital? We know that a lot of stroke survivors go on to have a second stroke – especially in the first three months after their first one, but the risk remains high up to five years later. We also know that once patients are back at home it can be hard to keep up with rehab exercises and track progress towards recovery. Things are even tougher for older patients or people living in isolated rural areas, who might struggle to attend rehab sessions and clinic appointments in the city.

In this case, Constant Therapy, delivered via an iPad or smartphone, can close the gap. In a scientific peer-reviewed study conducted at the Boston University Aphasia Research Laboratory, our co-founder Dr Swathi Kiran describes the moving story of (Bob*) a 71 year old retired teacher living in the aftermath of a stroke. When he first arrived at Dr Kiran’s clinic, Bob had trouble saying words, understanding simple yes/no questions, and naming things. Most insurance companies only provide for a few weeks of speech and language therapy after a stroke, and to make matters worse he lived all the way up in New Hampshire and had to travel long distances to get the care he needed. Dr Kiran prescribed a series of exercises to be conducted at home using Constant Therapy to address the problems caused by his stroke. 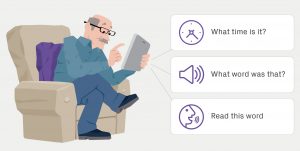 Exercises that supported Bob to say words started off with basics like copying words, matching sounds to letters, and putting things in categories. As he got faster and more accurate at these basics, the Constant Therapy system started getting progressively harder and adding more complex tasks like spelling words, completing sentences, and understanding words in everyday tasks like listening to a voicemail message. By practicing nearly every day in the comfort of his home and a pace personalized to him by the system, Bob was making great progress, when tragedy struck again.

Just four months after his initial stroke, Bob’s wife noticed that while he seemed fine on the outside, he was struggling with rehab exercises that he had been passing with flying colors just days before. The change in performance on the Constant Therapy exercises prompted a visit to his doctor.  His family doctor noticed some other symptoms and an MRI scan revealed he’d had a second stroke. A second stroke can be devastating, but because he had already been using rehab exercises most days he was able to get back on track quickly. While he suffered setbacks, over the course of the next year he continued to make steady gains at his new pace and his family and therapists could be kept up to date on his progress. After discharge from a second course of speech-language therapy, Bob worked on maintaining and improving skills at home with Constant Therapy. As it turns out, there were some early warning signs from his iPad exercises in the days leading up to and around the second stroke. While he had been making steady progress through identifying words, naming pictures, and doing multiplication maths at a moderate level of difficulty, around the time of his stroke he suddenly went from 80-100% accuracy to 50% and then 0% accuracy in a matter of days. Although we can’t know exactly when the stroke took place it did make us wonder – could digital platforms act as an early warning system for the onset of second, third, and other follow-on strokes in patients who don’t get to see their therapists often?

Bob’s story of stroke survival is far from unusual

We know today there are about 800,000 strokes a year in the United States, and about 1 in 4 of those are in people who’ve had a previous stroke. Our team is always thinking of ways we could help patients and their therapists to not only rehabilitate themselves after stroke but also to help provide them with key information to manage their care in the months and years afterwards on the road to recovery.